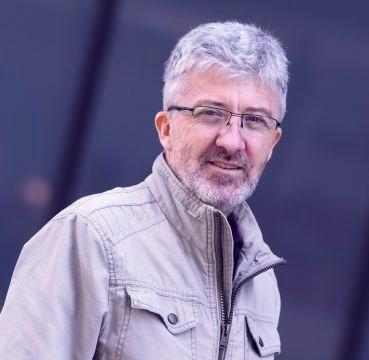 He graduated in Philosophy at the Faculty of Philosophy in Belgrade. He is a member of the Association of Drama Artists of Serbia, Association of Theater Critics of Serbia and member of IJAS. For decades, he has written theater reviews, studies and texts about theater in numerous magazines and newspapers, starting with “Borba” through “Naše Borbe”, “Nin”, “Scene”, “Status”, “Ludus”, “Cord”. For more than two decades, he has written criticism for the daily magazine “Blic.” He is a member of the current editorial staff of the theater arts journal “Scena.”

He was a curator or a member of the jury of all domestic theater festivals, as well as of the jury giving out annual acting awards Belgrade-wise. He was the artistic director of the National Theatre “Sterija” in Vršac (one theatre season).

Three Faces of Loneliness, Belgrade – Moscow, For Real, Why Not, based on the drama text Macan and I, and his other works have been performed on professional theater stages. He is the author of the novel Death of an Unknown Sax Player, published by “Prometheus” from Novi Sad.

He was awarded the Sterija Award for the contemporary dramatization of The Golden Fleece by Borislav Pekić, a joint effort, then the Award of the National Theater in Belgrade for the dramatization of the novel Talking It Over by Julian Barnes, the Annual Award of the Terazije Theater, Belgrade.

He has been engaged as the dramaturge of some plays at the Terazije Theater and other Belgrade theaters.

He lives and works in Belgrade.